The Democratic Republic of Congo (DRC) is one of Africa’s most rapidly growing economies. Since 2010 economic growth has exceeded the average for Sub-Saharan Africa by two percentage points, projected to reach over 10% growth in 2015. However, the DRC has some of the worst health and nutrition indicators in the world and is ranked last (#187) in the 2013 Human Development Report. As such, the DRC is not on track to achieve any of the Millennium Development Goals (MDGs), especially those related to Maternal and Child Health.

The higher level objective to

The proposed project development objective is to improve utilization and quality of maternal and child health services in targeted areas.

END_OF_DOCUMENT_TOKEN_TO_BE_REPLACED

The World Bank Group, other than providing IDA & IBRD financing to bor

rowing governments, also has three other pillars. These are the IFC, MIGA and the ICSID. The activities by the MIGA were explained in an earlier post, in this article we are focusing on the International Finance Corporation ( IFC ), the private sector pillar of the WBG. For the first time in the history of the World Bank Group the IFC was the pillar with the biggest budget, financing for more than $22 billion in fiscal year 2014.

The IFC provides financial support through loans and equity financing to its clients and additionally provide advice to unlock private sector investment. For a project to be eligible for IFC support a number of criteria must be met. The project must be located in a developing country that is a member of the IFC, active in the private sector, be technically sound, have good prospects of being profitable, benefit the local economy and satisfy environmental and social standards.

END_OF_DOCUMENT_TOKEN_TO_BE_REPLACED

The development objective of the TA is to support the Can Tho City Peoples’ Committee and the City’s Department of Construction in implementing the poor-inclusive City Sanitation Plan by providing expertise to develop curricula, guidelines and training programs to increase implementation capacity for the Plan.

Through an assessment of current and future demand for human resources competencies in sanitation in Can Tho the TA will establish a framework and program for delivering capacity building to the city agencies responsible for the planning, coordination and implementation of sanitation services in the city’s urban, peri-urban and rural areas. 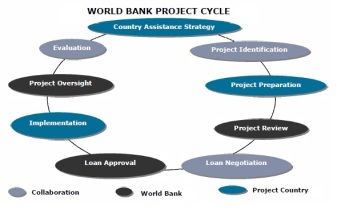 cycle, this post will dive deeper into what the Country Assistance Strategy is and what it means for you.  The project cycle starts with the formulation of a Country Assistance Strategy (CAS) or Country Partnership Strategy (CPS). This CAS / CPS provides a comprehensive diagnosis of the challenges of project development and identifies the areas the World Bank can have the biggest impact on poverty reduction.

In 2013 a new World Bank Group Corporate Strategy was announced. This lead to the establishment of Global Practices and Cross-Cutting Solution Areas this past July; something we also reported on earlier. After the reorganization the CAS / CPF was replaced by a new strategic country development document, now called the Country Partnership Framework (CPF). From 2015 onwards all strategic country development documents will be created according to the new CPF format.

Like the former CAS / CPS, the CPF provides the reader with borrowing countries development objectives, that it wants to achieve with the help of the World Bank. It also includes a result chain of how these objectives will contribute to the Bank’s twin goals of reducing absolute poverty and boosting shared prosperity. Additionally, the CPF focuses on specific sectors where the Bank plans to identify broader objectives.

The CPF will be based on a Systemic Country Diagnostic (SCD) document, which contains data that provides analysis and grounding for determining the opportunities and constraints in a country. The SCD together with the local government’s national development plan will be used to initiate a discussion about priority areas and where the Bank’s added value could be utilized.

The CPF is drafted by the World Bank country team residing in Washington DC, in cooperation with the regional or country office. Hereafter it must be signed off by the Regional Vice President and the Managing Director and will then be sent to the Bank’s Board of Directors for discussion and approval.

During the process of gathering data for the SCD and drafting the CPF the Bank often consults with the various stakeholders, including the private sector, civil society and possible other institutions like for example the foreign embassies. Although it is not expected that the World Bank actively engages with a lot of companies in the process of drafting a CPF, overall visions of these companies on the potential development of the borrowing countries can be taken in account.

In conclusion, the CPF is a strategic vision document which outlines the Bank’s strategy concerning activities with the borrowing countries. It will identify certain key sectors that are critical for the borrowing country’s development. As the CPF is sometimes subject to stakeholder consultations and external input, it would beneficial for a company to be involved in the process. Either way examining the CPF closely will give the company a good idea of the future direction of the WBG in the country.

The African Health Markets for Equity (AHME) is a five-year project that aims to improve health outcomes through the provision of quality private sector health care targeting the poor in Kenya, Nigeria and Ghana. In Kenya, the AHME project is supporting the National Hospital Insurance Fund (NHIF) to design, test, and scale-up the Health Insurance Subsidy Program (HISP) that will serve as a mechanism for the Government of Kenya to subsidize NHIF insurance cover for the poorest households in Kenya.

END_OF_DOCUMENT_TOKEN_TO_BE_REPLACED

Aims and Objectives of the Course
CPPP caters to procurement practitioners across the globe and the endeavor is to enable anyone interested in public procurement to get an overview of the field and to understand the rationale behind Public Procurement decisions.

Registration is FREE and it is suggested that the course benefits:

More information can be found here

Other courses and more information can be found here

Since 2007, under the programmatic framework of Lighting Africa, Lighting Asia, and Lighting Global, IFC and the World Bank (the World Bank Group, WBG) have built a portfolio of country program platforms to directly support the development of a vibrant off-grid solar devices market. The WBG off-grid solar devices market support programs seek to lower first-mover risk for both industry members and end-users, addressing barriers to market development, and enabling a competitive sustainable commercial solar devices industry to rapidly scale.

It is the intent of the WBG to hire a Consultant with a demonstrated deep understanding of the dynamics, players, trends and drivers of the off-grid solar devices market. The Consultant should be in position to expand the WBG and off-grid solar device industrys comprehensive understanding of the markets progression over the past three years, and translate those insights into a credible and insightful view of how the industry will develop and markets will evolve in the next 3 years.

END_OF_DOCUMENT_TOKEN_TO_BE_REPLACED

China is rapidly urbanizing, creating pressure for cities to expand their public infrastructure, improve municipal services, and provide employment for residents and migrants. To relieve these pressures on the larger cities, the government’s policy of a ‘New
Urbanization Agenda’ is now focused on lower-tier and smaller-sized cities.

Chongqing’s development strategy of “one circle and two wings” defined a four-tier urban
settlement system, including a metropolitan core, 4 sub-regional central cities, 25 county seat cities and around 300 key towns. Chongqing Municipality (CQM) has determined that the twenty-five county seats (all third-tier cities) will play a major role in relieving pressures by accommodating one-third of CQM’s total urban population in the future. Typically located in deep river valleys and built on scattered small pockets of scarce land available for urban construction, county seats in these areas of Chongqing are still exposed to relatively high risks of events such as river flooding, landslides, soil erosion, and water pollution. Reducing these risks is a high priority to ensure a sustainable basis for economic and social development. The proposed project will support the implementation of an integrated river basin management approach to address water pollution and flood risks in the four project counties, as part of the municipality’s rapid urban-rural integration investments.

END_OF_DOCUMENT_TOKEN_TO_BE_REPLACED

Article published by the World Bank the 8th of December highlights the need to lower emissions and build resilience to climate change. Creating “Smart cities” will play an important role.

The World Bank group contributes in these efforts not only by utilizing the Green Climate Fund but ” it will require continued support for clean transportation and building low-carbon, livable cities, particularly in the fast-growing cities of the developing world where development today will lock in growth patterns for decades to come, Kim said. It will also require shifting toward climate-smart agriculture and increasing the World Bank Group’s financial innovation.”

“I will drive our institution and all its capabilities – financial, technical and human – to support this development transition that we must support together, toward the goal of preserving our planet for all future generations,” Kim said.

The World Bank is assisting universal health coverage in Indonesia. The objective of this assignment is to conduct a survey of public expenditures and service delivery across a sample of district health offices; public and private primary care and private maternal health facilities and health care workers; and patients in Indonesia.

Activities will include: (i) providing assistance with the adaptation, development, and translation (English to Indonesian) of survey instruments, including facility-specific instruments and discrete instruments for district health offices, health care workers and, in selected areas, patient exit interviews; (ii) field testing and assistance with the revision and finalization of instruments; (iii) seeking and obtaining the necessary approvals and ethical clearances required for the work; and (iv) conducting data collection using the finalized instrument as per the sampling design, including data entry and cleaning. END_OF_DOCUMENT_TOKEN_TO_BE_REPLACED