Hello everyone and let me start by expressing my appreciation to you and the Japanese government for hosting us for this launch of the IDA20 replenishment, in which Japan has played such a leadership role. I would like to thank the Finance Minister personally for playing such a crucial part in this process. I would also like to thank and congratulate the colleagues gathered here in Tokyo today, coming from all over the world, for making IDA20 a successful replenishment.

END_OF_DOCUMENT_TOKEN_TO_BE_REPLACED

Food lines that stretch across multiple city blocks. Spiraling unemployment. Out-of-control inflation. Unsustainable debt. These issues, which traumatized many economies across Latin American in the 1980s, continue to reverberate today and,

given current economic conditions, you could be forgiven for fearing that history is about to repeat itself.

However, the region’s biggest risk at present is not another “lost decade” fueled by financial crises, but rather a decade of missed opportunities.

The debt crises of the 1970s and 1980s were searing experiences that find an echo in today’s troubles. Then, as now, Latin American countries had large debt loads. Then, as now, the global economy experienced unique macroeconomic shocks that sent inflation soaring (the Arab oil embargo then; the pandemic and Ukraine war now). And then, as now, central banks around the world – especially the US Federal Reserve – were raising rates to fight inflation.

END_OF_DOCUMENT_TOKEN_TO_BE_REPLACED

From education to entrepreneurship, global recovery efforts need to pay

particular attention to the needs of women and girls.

Policymakers haven’t always considered how economic shocks impact women and men differently — or how governments should respond.  When the 2008 recession hit, few asked how stimulus measures would affect women compared with men.

END_OF_DOCUMENT_TOKEN_TO_BE_REPLACED

eleventh month. Building on insights from COVID-19 Business Pulse Surveys, the first blog post in this series described the implications of the crisis for firm sales, employment, and financial performance, while the second discussed record levels of uncertainty and firms’ coping strategies, including adoption of digital technology. This third and final part of the series focuses on public policy responses.

END_OF_DOCUMENT_TOKEN_TO_BE_REPLACED

The toxic cocktail of climate change, conflict, and COVID-19 is making itself felt most intensely

in the world’s poorest and most vulnerable countries.  As a result, a record 235 million people worldwide will need humanitarian assistance and protection in 2021 – an increase of 40% from last year.

END_OF_DOCUMENT_TOKEN_TO_BE_REPLACED 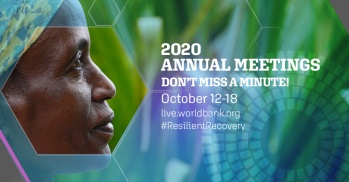 decades of development outcomes. Last spring, we successfully championed a moratorium on debt for the world’s poorest countries and launched a fast, broad-based response to COVID-19. We are financing emergency operations in over 111 countries – home to 70% of the global population- which has been the largest and fastest crisis response in the World Bank Group’s history.

END_OF_DOCUMENT_TOKEN_TO_BE_REPLACED

Ahead of the World Bank Group-IMF Annual Meetings, Frankfurt School of Finance and Management will host World Bank Group President David Malpass who will discuss the impact of the COVID-19 pandemic on the world’s poorest and most vulnerable people and the challenge of building a resilient and inclusive global recovery.

The event will be introduced by Germany’s Bundesbank President Dr. Jens Weidmann and include a conversation between President Malpass and Professor Nils Stieglitz, President and Managing Director of Frankfurt School of Finance and Management.

END_OF_DOCUMENT_TOKEN_TO_BE_REPLACED

: By Sam Fargher and Stephane Hallegatte

Like every other country, the Republic of Fiji faces the unprecedented challenge of managing the consequences of the COVID-19 pandemic. While the number of cases remains low, in a country where international tourism is a cornerstone of the economy, the implications of the crisis are massive. GDP is expected to contract by more than 20 percent in 2020, with a 75 percent drop in international tourist arrivals and 40,000 tourism jobs already lost. In response, the government is planning a 3.7-billion-Fijian-dollar stimulus package to protect the population and support economic activity.

END_OF_DOCUMENT_TOKEN_TO_BE_REPLACED

Following decades of violent conflicts in Burundi, Rwanda, South Sudan and the

Democratic Republic of Congo (DRC), Tanzania became home to thousands of refugees seeking shelter.  By the end of 1994, Tanzania— known for its hospitality and open-door policy— was hosting close to 1.3 million refugees in its northwestern region , making it one of the top four refugee-receiving countries in Sub Saharan Africa. The majority of these refugees settled in 13 main camps in the northwestern districts of Karagwe, Ngara, Kasulu, Kigoma and Kibondo.  In some of these districts, refugees outnumbered Tanzanians five to one— making it perhaps the most pronounced forced displacement crisis. By the end of May 1994, the Benaco refugee camp in Ngara district had become the largest in the world.