Skip to primary content
Water has always influenced where we live. Today, as climate change accelerates the global

water crisis, the relentless increase in the movement of people around the world requires a considered response to turn crisis into opportunity.

What makes us move

There are more than 1 billion migrants in the world today – and water deficits are linked to 10% of the rise in global migration. The World Bank’s just-released flagship publication on water shows that it is a lack of water, rather than too much, that has a greater impact on migration.

Ebb and Flow consists of two volumes. Water, Migration, and Development examines the link between water and migration, and the implications for economic development. It is based on analysis of the largest data set on internal migration ever assembled, covering nearly half a billion people in 64 countries from 1960 to 2015, and several national and global-level data sets that have been combined for the first time. Volume 2, Water in the Shadow of Conflict, addresses the interplay of conflict with water and migration dynamics. in the Middle East and North Africa (MENA).

Climate change is fueling water-induced migration, as rainfall variability in particular drives people to search for better prospects elsewhere. Seventeen of the world’s countries – home to 25% of the world’s population – are already experiencing extreme water stress. Water challenges are disproportionately felt in the developing world, with more than 85% of people affected by rainfall variability living in low- or middle-income countries.

This does not mean that there are waves of poor “water refugees” migrating to escape drought. In reality, it is the poorest who often lack the means to migrate, even when doing so might improve their livelihoods and prospects. Residents of poor countries are four times less likely to move than residents of middle-income countries.

Water in the shadow of conflict

In conflict-affected areas, such as the MENA region, there are added layers of complexity when conflict and unemployment are two of the driving forces behind migration. MENA is the world’s most water-scarce region, but water is more often a casualty of conflict rather than a reason for migration. Water infrastructure is frequently targeted during conflict, leaving hundreds of thousands of people without access to this essential resource.

However, direct conflict over water risks in the region is not as common as expected. In fact, water scarcity has historically led more to cooperation than conflict. Of 975 water events involving international river basins in the MENA region between 1948 and 2008, 56% were cooperative, 37% conflictive, and 8% neutral. Given the number of armed conflicts in the region over that period, the fact that water issues have historically led to cooperation is notable.

This cooperative approach needs to be preserved and strengthened as the effects of climate change intensify, and weather shocks inevitably exacerbate vulnerabilities and tensions over water resources.

At a global level, migration is felt most acutely in cities, which are now home to 55% of the world population. Cities need to consider the policy implications of their growing population – not just the number of migrants they receive, but also the human capital they bring with them. Labor migrants who leave regions with lower rainfall and frequent dry shocks usually possess lower educational levels and skills than other migrant workers, implying significantly lower wages and less access to basic services at their destination.

As climate change and an influx of new residents put increasing strain on existing, often inefficient, water infrastructure, many cities are at risk of reaching “day zero”, when the taps run dry. Policies and infrastructure needed to build water resilience are expensive, but a drought is far more costly, potentially reducing a city’s economic growth by up to 12%. 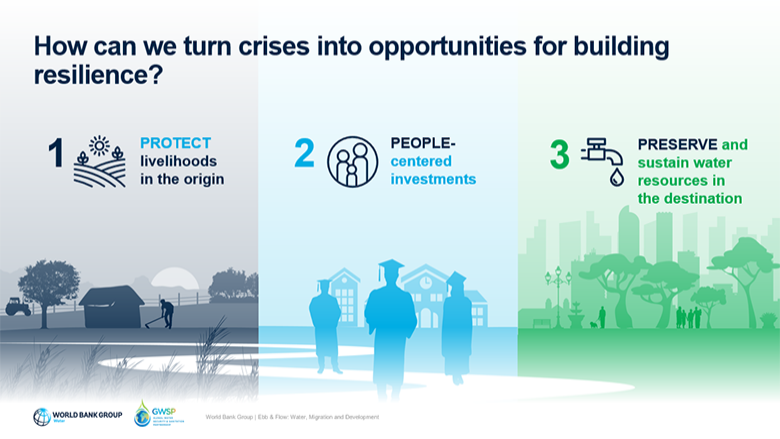 It pays to invest in water

People, livelihoods, and resources need to be protected. A complementary range of policies can turn water-induced crises into opportunities. Policy-makers, especially in conflict-affected regions like MENA, will need to make trade-offs between short-term, uncoordinated measures to respond to immediate water needs, and long-term measures needed to address structural water issues.

In both cities and rural areas, there is an urgent need to build water resilience. People-centered investments in financial safety nets, portable assets like education, water supply and sanitation, health care, and safe housing for poor migrants can help protect people against severe water-related shocks. Cities can also implement better water practices, such as reducing water demand, recycling wastewater, harvesting storm water, and redesigning urban areas to resemble sponges that soak up water and store it below ground.

At the same time, livelihoods in areas people are migrating away from also need to be protected. These vulnerable communities would benefit from climate-smart farming techniques, farmer-led irrigation, and green infrastructure to buffer against water variability and scarcity. Short-term measures to reduce the impact of water shocks need to be complemented by longer-term strategies to broaden opportunities and build resilience in these communities.