Following tradition, they will wait seven days before giving him a name. Surrounded by their herds of cows, sheep and goats, Kaffia helped her daughter with the birth in their tent in the middle of the brush, far from the closest medical center. This is nothing new for Kaffia. She comes from a family of livestock herders who seasonally move their herds from one place to another, along with some 800,000 herders in Senegal and millions of others throughout the Sahel.

Originally from Podor in the far north of Senegal, Kaffia Diallo accompanied her pregnant daughter as she moved her herds and helped her give birth to a baby boy in their camp near Kaffrine, almost 300 km to the south. Photo: © Elena Queyranne/World Bank

With 75% of the Sahel being too dry to allow livestock herders to be sedentary, they adapt, moving their herds according to the availability of water and pastureland. “We have always been a family of herders and I began moving our herds when I was 15 years old,” Kaffia explained. “But now that I am old, I stay in the village and take care of my grandchildren. This year was an exception because my daughter was pregnant.” 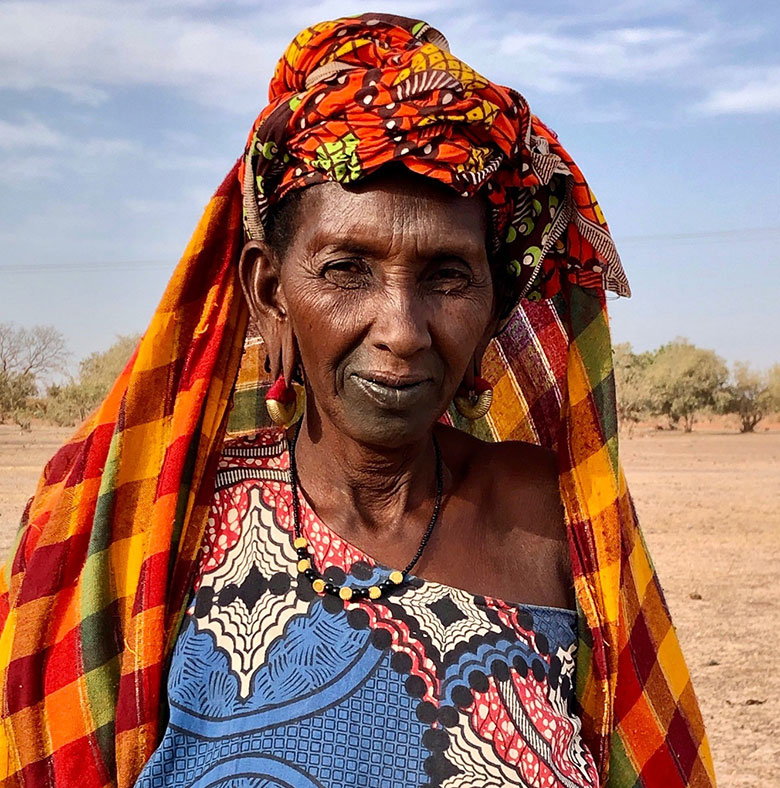 Each year, as the dry season begins, Kaffia and her family leave their region of Podor in the far north close to the border with Mauritania and journey by cart to the south in search of pastureland and water for their cattle, goats, and sheep. © Elena Queyranne/World Bank

Climate change is a reality here

Each year, at the first signs of drought in early November, as soon as rivers start to dry up and pastures become scarce, the family leaves the Podor region in the north, close to the border with Mauritania, and moves south. They travel by cart in search of food for their own herd and the herds they care for on behalf of uncles, cousins and farmers in their village who also raise cattle.

“When our animals have eaten all of the available grasses, we move south, sometimes as far as the Gambian border,” explained Kaffia, her eyes weary and her face weathered by years of relentless sun, wind and dust.

It is a months-long journey that pastoralist populations often take with several families. When the first rains return in June, they head back north. But as Kaffia explained, “This year, as the grasses became scarce earlier, we had to head out in October.”

Here, climate change is not an opinion, it is a reality. The rainy seasons are growing shorter and the dry seasons are longer, sometimes lasting up to nine months. The drought in 2010 was particularly arduous. In Niger, it is estimated to have killed more than 4.8 million head of cattle, roughly 25% of the herd, representing a loss of more than $700 million for the country’s economy. 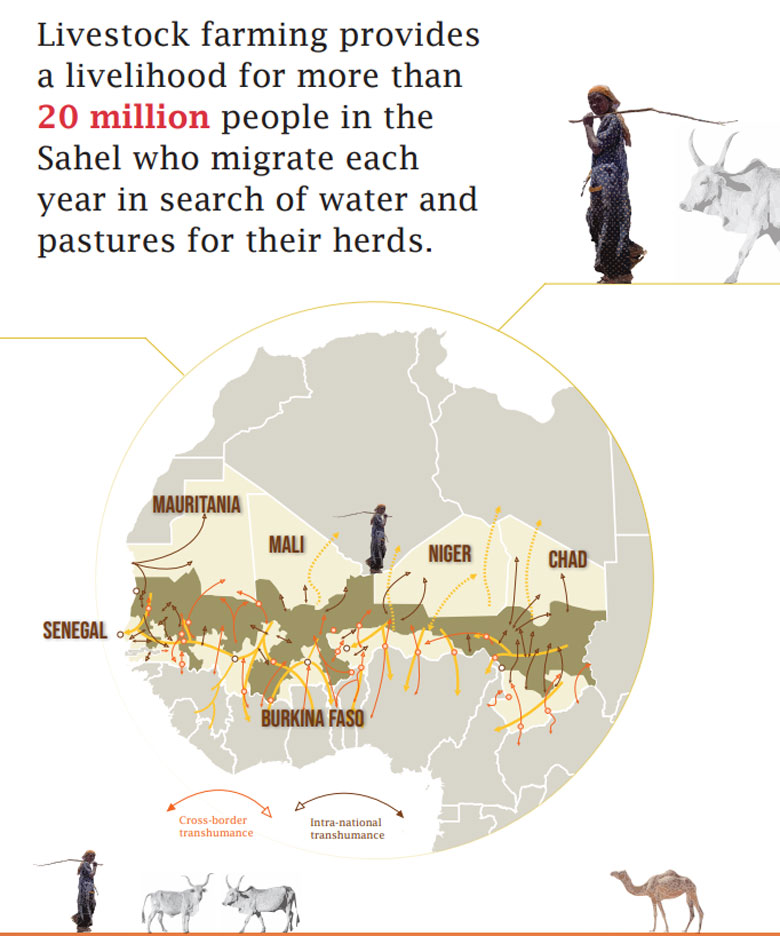 Even though the routes change depending on water points, pastures and the constraints of the growing insecurity in the region, herders generally use the same roads. This creates long-lasting links between the resident farmers and herders.

“Each year we put up our camps close to the same villages where we sell our products, buy food and take water from the collective wells. If necessary, we go to the doctor or have our animals cared for.” said Kaffia, who has “about” 250 goats and sheep and a dozen cows. In the Sahel, no herder says exactly how many heads they have for fear of bad luck. 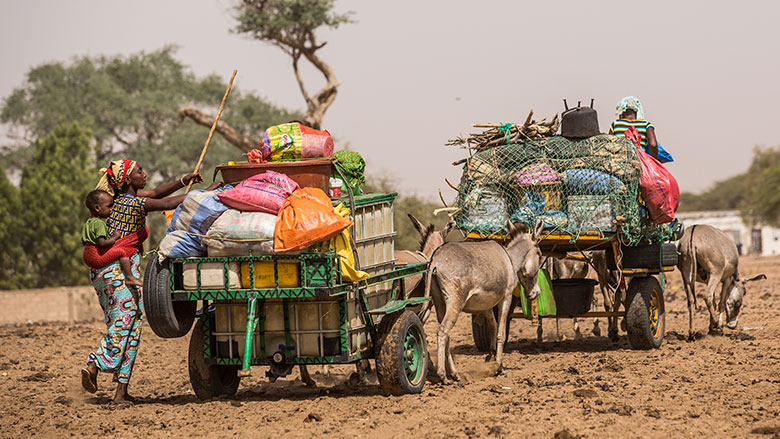 The herders leave with the animals, while the rest of the family follows by cart with all of the necessary supplies. Increasingly wives remain in the village with the youngest children so they can go to school. Photo: © Vincent Tremeau/World Bank

The role of pastoral herders is generally underestimated. Eco-friendly before anyone else was—owing to their extensive method of livestock raising and the mobility of their herds—they provide many essential services. They help improve vast tracts of non-arable land and serve as an economic lung for the region. They also contribute to agricultural productivity by grazing their herdson fields after the harvest thereby fertilizing the soil, and to food security by selling their milk and animals on the road.

While this coexistence is generally harmonious and is part of a win-win ecological cycle, it can also be a source of tension. Water has become increasingly scarce and farmers are expanding their fields as the population grows, encroaching on pastoral regions and transhumance corridors.

“Migrant herders are arriving earlier and earlier, before the end of our harvests and sometimes the animals destroy our fields,” said Hamadj Barry, mayor of a village near the Kaffia family encampment. 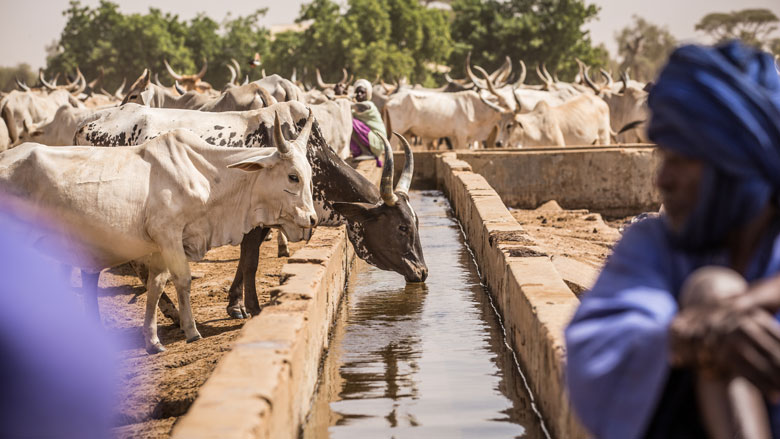 As they move, herders water their herds at collective water points. They own on average 200 to 500 head of livestock. Considering that a goat or sheep consumes 5 liters of water per day on average, a cow, 25 liters, and a camel, up to 30 liters, this can create tensions with sedentary populations on sharing water. © Vincent Tremeau/World Bank.

The situation has been complicated in recent years by long periods of drought, growing insecurity in some countries of the Sahel, and more and more restrictions on the movements of herds and herders among the countries of West Africa. This has seriously disrupted traditional herd management methods, resulting in more frequent and potentially more serious conflicts. 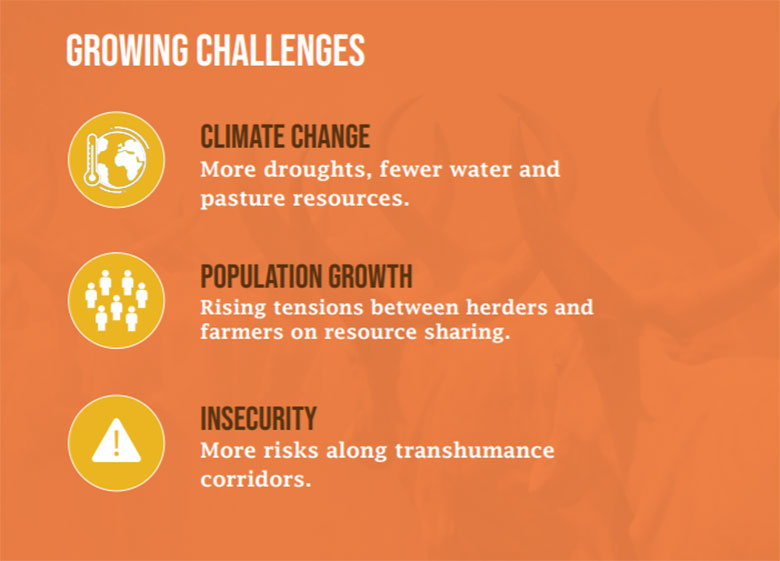 PRAPS: A project benefitting millions of pastoral and agropastoralist families

Despite the challenges, the situation has been peaceful in Hamadj’s village for some time now. Herders and villagers have learned to listen to one another and engage in discussion to find solutions.

“We welcome the herders and show them where they can set up their encampment,” explains Hamadj, who is also the head of a dialogue committee that promotes social mediation. “We also make them aware of their rights and their obligations.” 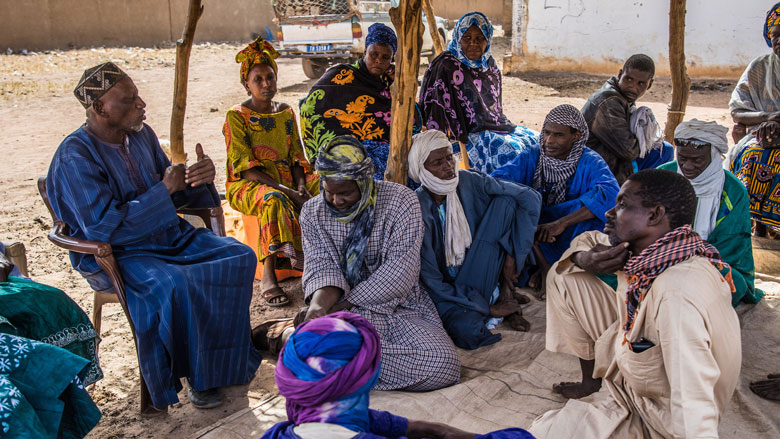 Koumpentoum, Senegal. Amadou Diallo speaks with herders and farmers during a consultation meeting to open a dialogue and seek compromises so that solutions can be found and conflicts reduced. © Vincent Tremeau/World Bank

These committees complement other related actions taken by the Senegalese government since 2015 under the Regional Sahel Pastoralism Support Project (PRAPS). Deployed in six countries of the Sahel—Burkina Faso, Chad, Mali, Mauritania, Niger and Senegal—PRAPS aims to protect pastoral systems by improving resource management and animal health, facilitating access to markets, diversifying sources of income for pastoral households and managing conflicts. It is supported by $248 million in financing from the World Bank through the International Development Association (IDA), and coordinated by the Permanent Inter-State Committee for Drought Control in the Sahel (CILSS).

“The World Bank is trying to achieve two main goals in the Sahel: mobilize financial resources to protect a fragile environment, and help the countries restore the living conditions of their population, particularly livestock herders, who are essential links in the socio-economic development and stability of the region.” 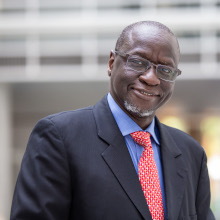 In each of these countries, PRAPS has made it possible to establish rules for managing the areas primarily dedicated to pastoralism.This includes essential infrastructure established around water points, such as reception zones for the pastoral herders, pasture for the livestock, vaccination stations, livestock markets, fodder storage warehouses, and shops managed by women. A president oversees the system and various village committees responsible for managing this infrastructure.

“One of the things that has most changed our lives is the training provided by water and forestry officials for combating brushfires,” explained Hamidj. “It is a transmission of knowledge that we will keep forever.”

“When PRAPS was set up in 2015, there was a great deal of conflict,” said Maty Ba Diao, regional project coordinator for the CILSS. “This project has helped increase the resilience of pastoral families by enabling them to express their needs, providing them with essential services and infrastructure, and giving them the tools and knowledge they need to manage this grazing land themselves on a sustainable basis.”

Between 2015 and 2020, PRAPS helped establish and improve the management of more than 5 million hectares of pastureland, 181 water points, and 66 cattle markets, while delineating 1,414 km of transhumance corridors. It also supported the economic activity of 20,700 people, 88% of whom were women. 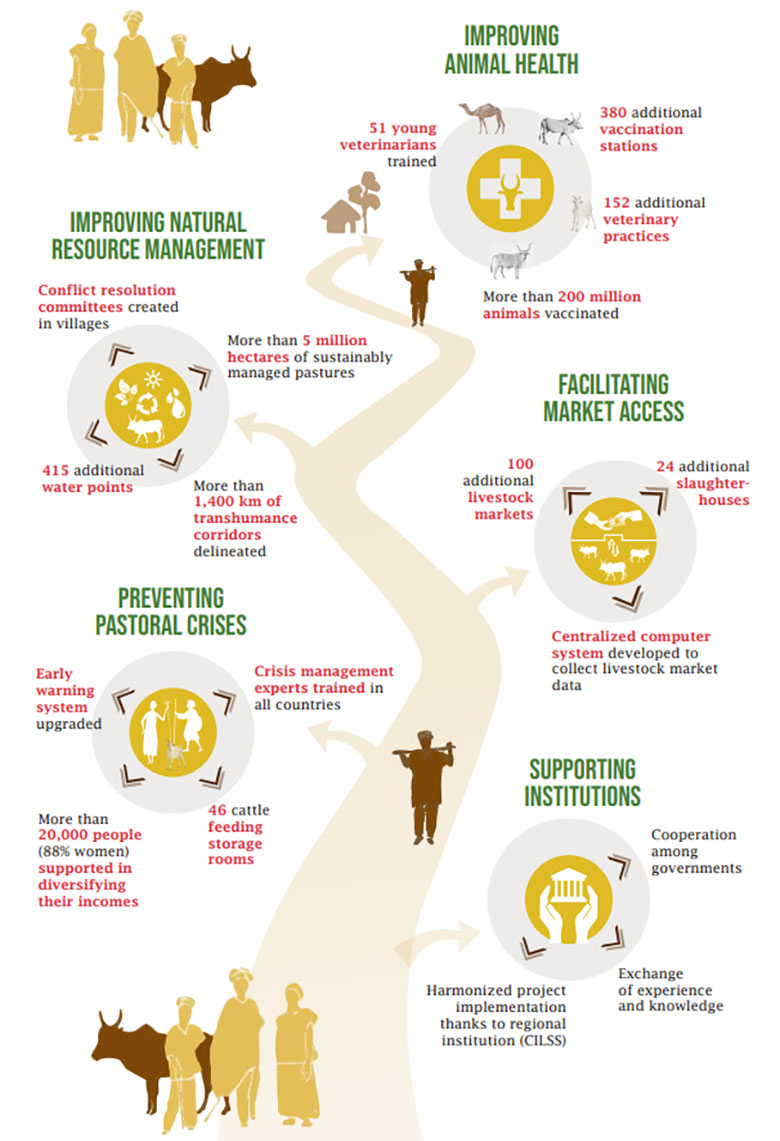 “The World Bank is trying to achieve two main goals in the Sahel: mobilize financial resources to protect a fragile environment, and help the countries restore the living conditions of their population, particularly livestock herders, who are essential links in the socio-economic development and stability of the region”, said Ousmane Diagana, Vice President of the World Bank for Western and Central Africa. “PRAPS is an example of successful cooperation. Everyone had to be mobilized, from village chiefs to high-level ministers, to put in place a colossal logistical framework across countries.”

There is still work to be done, and the COVID-19 pandemic calls into question the hard-won balance. Border closures have meant herds of livestock have not been able to return to their homelands, creating significant animal health risks with their high concentration at the borders. Overexploitation of pastures has also increased the risk of conflicts between farmers and herders at the start of the agricultural season. In addition, restrictions on mobility have led to sharp increases in livestock prices in towns, and the closure of weekly markets has made the livelihoods of pastoralists all the more precarious.

PRAPS partners have mobilized to set up monitoring initiatives, strengthen existing early warning systems, and provide targeted responses to support those in agro-pastoral sectors. The path is mapped out and the World Bank has committed to providing additional funding to PRAPS to strengthen achievements and sustainably increase the resilience of millions of pastoral families in the Sahel.

*To discover more about resilience in the Sahel, click on each image