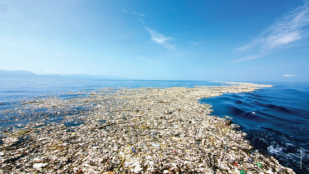 are declining and disappearing, and the number of dead zones is increasing. A dearth of waste management on land results in pollutants and debris, including plastics, finding a home in the ocean.

A new World Bank report, Marine Pollution in the Caribbean: Not a Minute to Waste, analyzes the causes and offers solutions for ocean pollution in one of the world’s most popular tourist destinations, now a hotspot for marine debris, especially plastics.

In the Caribbean and around the world, plastics and other waste are more likely to end up in the oceans when waste is poorly managed, such as through open dumping, open burning, and disposal in waterways.

The marine litter found in the Caribbean comes both from the region and from northern waters, brought in by prevailing currents.

Studies have measured the concentration of plastics across the Caribbean Sea and found as many as 200,000 pieces of plastic per square kilometer in the northeastern Caribbean, according to the report.