are declining and disappearing, and the number of dead zones is increasing. A dearth of waste management on land results in pollutants and debris, including plastics, finding a home in the ocean.

A new World Bank report, Marine Pollution in the Caribbean: Not a Minute to Waste, analyzes the causes and offers solutions for ocean pollution in one of the world’s most popular tourist destinations, now a hotspot for marine debris, especially plastics.

In the Caribbean and around the world, plastics and other waste are more likely to end up in the oceans when waste is poorly managed, such as through open dumping, open burning, and disposal in waterways.

The marine litter found in the Caribbean comes both from the region and from northern waters, brought in by prevailing currents.

Studies have measured the concentration of plastics across the Caribbean Sea and found as many as 200,000 pieces of plastic per square kilometer in the northeastern Caribbean, according to the report.

Based on voluntary beach cleanups facilitated by the Ocean Conservancy, there is more litter in many Caribbean countries than the estimated global average. The results indicated that litter on Caribbean beaches could be more than triple the global average of 573.

Data from beach and coastal clean-ups in 2017 indicate that plastic beverage bottles alone amounted to 21% of the items recorded. Among all plastic items collected, 35% were single-use plastics. 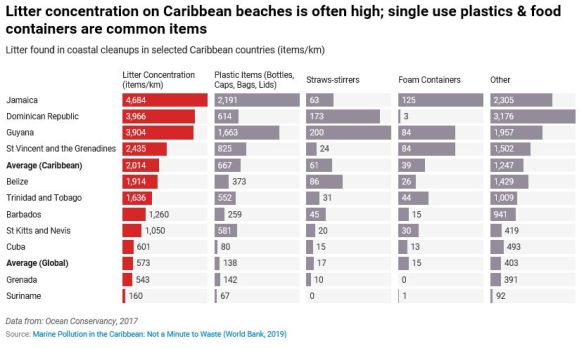 About 85% of wastewater in the wider Caribbean region goes untreated into the ocean, and 52% of households in the insular Caribbean—comprising The Bahamas, the Greater Antilles (Cuba, Dominican Republic, Haiti, Jamaica, and Puerto Rico); and the small islands of the Lesser Antilles—lack sewer connections. More than 320,000 tons of plastic waste remains uncollected each year. Some 22% of households dispose of waste in waterways or on land where it can be washed into waterways. 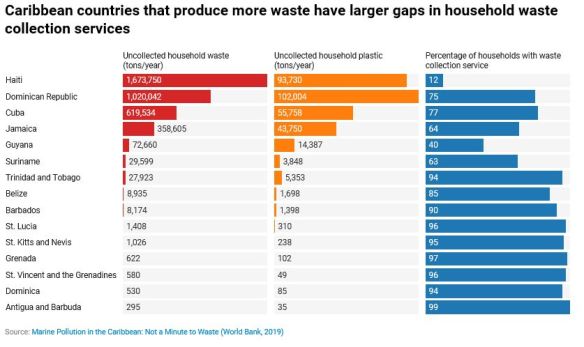 Up to 80% of the litter found in our oceans is made of plastic. Unlike organic waste, plastic can take hundreds to thousands of years to decompose.

In 2016, The world generated 242 million metric tons (MT) of plastic waste—12% of all municipal solid waste, according to the World Bank’s What a Waste report. Plastics mainly originate in three regions—57 million MT from East Asia and the Pacific, 45 million MT from Europe and Central Asia, and 35 million MT from North America.

About 95% of the 78 million metric tons of plastic packaging produced each year is single use, with a potential recycling market value of $75 billion a year. But only 14% of this single-use plastic is recycled, and 64% is lost economically.

With marine pollution a threat to the $57 billion a year coastal tourism industry, 14 Caribbean countries—more than a third—have banned the use of single-use plastic bags and/or Styrofoam.

More action is needed to stem the flow of plastics into the ocean – including new policies, better waste-management coverage and services, behavior changes by consumers and industry, and investments, innovation and private sector interventions.

Read more about the report and about beating marine pollution in the Caribbean. Tell us what you think should happen.