Education TV as a remote learning tool during a pandemic

School closures as a result of the pandemic affected more than 30 million children in Pakistan, including approximately 12 million children in Punjab. According to the World Bank, at least one million children would drop out of primary and secondary school as a consequence. To ensure the continuity of learning, the country turned to educational technology (EdTech) tools like TV, radio, and mobile phones. Almost all of Pakistan (95 percent) and Punjab (90 percent) had access to TV, so this became the most viable option for remote learning for students and for teacher training.

Pakistan’s Ministry of Federal Education and Professional Training (MoFEPT) and the School Education Department (SED) of the province of Punjab, Pakistan went into emergency education planning mode. In April 2020, Punjab rolled out the education TV program Taleem Ghar to support remote learning for its students. This was immediately followed by a roll-out of the federal education TV program TeleSchool across Pakistan.

As a response, the World Bank produced pragmatic guides called ‘Knowledge Packs’ to support policymakers in making quick yet informed decisions as they work with education ministries. For example, the Education TV Knowledge Pack includes case studies such as Pakistan’s to support with just-in-time pragmatic learnings from successful TV programing across countries; evidence of its effectiveness; steps and costs to start and enhance programing; and how to navigate the decision-making process. This initiative is part of the global program for Continuous and Accelerated Learning in response to COVID-19 supported with funding from the Global Partnership for Education (GPE), and implemented with UNESCO and UNICEF. Two World Bank projects have been providing financing: ‘Pandemic Response Effectiveness in Pakistan (PREP)’ provides funding for TeleSchool, and ‘Third Punjab Education Sector Project (PESP III)’ provides funding for Taleem Ghar.

Increasing student access and engagement, and the critical role of teachers

Education TV in Pakistan has been made available as on demand content on program websites, YouTube channels, and mobile apps. Punjab developed animated teacher characters for TV lessons (Miss DNA, Mr. Khawarizmi, and Miss Curie). “The biggest challenge was the disengagement of children from academic learning… The biggest question was—‘how will the children learn’? We started looking at what existed and what we could start immediately,” stated Umbreen Arif, Technical Advisor to the Pakistan Ministry of Federal Education and Professional Training, who led TeleSchool. 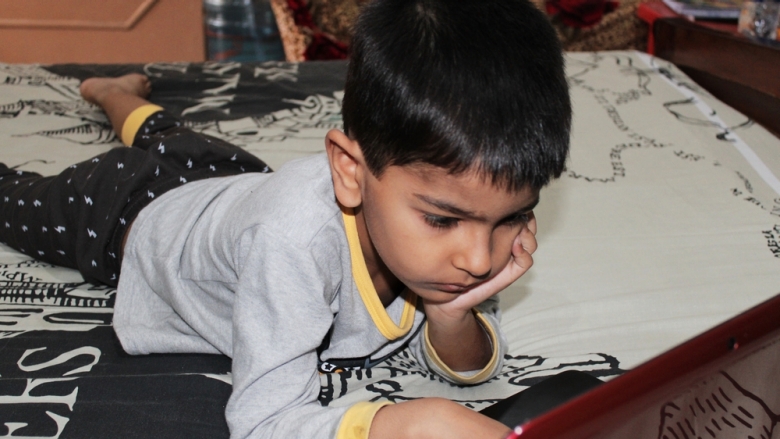 Communication campaigns were deployed, such as teaser videos, announcements via local mosques, and social media and newspaper advertising, leveraging public figures such as the Prime Minister. Support was provided to beneficiaries before and during programing. Resources such as TV broadcast and rebroadcast schedules and links to lessons can be easily accessed by users in one place.

Coordinating across multiple players has been challenging, since institutional planning involved almost ten different stakeholders within and outside the government. There has been limited student engagement, requiring continuous innovation especially for areas with historic low educational outcomes. Assessing impact on student learning has also been difficult given the limitations of education TV.

Education TV has been supporting distance education during emergencies, buttressing learning during teacher shortages/absenteeism, and serving as a complementary support for teachers and schooling. A Gallup Pakistan Rapid Assessment was conducted in May 2020 to measure the short-term impact of TeleSchool regarding awareness, viewership, perceived quality, and loyalty. Within two months, 1,200 households with children ranging five to fifteen years of age in Pakistan were telephonically surveyed: nearly one in every three Pakistanis surveyed said they had accessed TeleSchool lessons (with the highest proportion from Punjab), with an estimated weekly viewership of six million children. Seventy-seven percent were either satisfied or somewhat satisfied with TeleSchool lessons, with rural respondents more satisfied than their urban counterparts. 66 percent of parents surveyed said they would recommend TeleSchool to other parents. 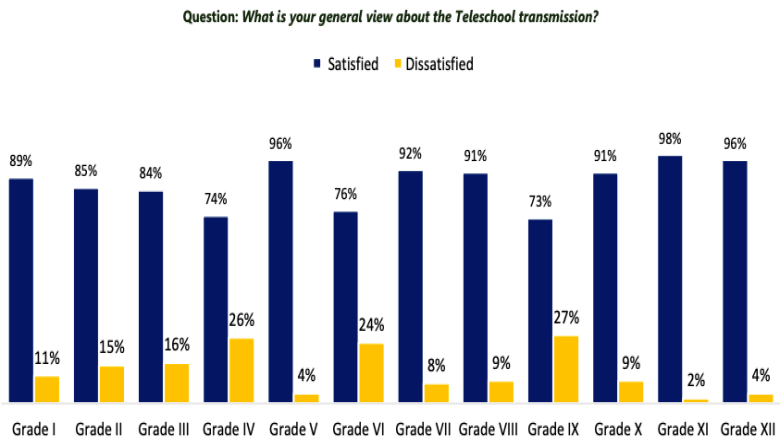 A Gallup Pakistan Rapid Assessment conducted to understand the short-term impact of TeleSchool found that, overall, families were satisfied with programing in the first two months of TeleSchool’s launch during COVID-19

However, by September 2020, IPSOS, a market research firm, found that awareness and use of TeleSchool and Taleem Ghar had decreased. This highlights the challenges faced by governments in keeping families and children engaged, and the need to continuously improve the emergency responses deployed.

Lessons learned from Pakistan’s emergency response and what next

A phased approach allowed the federal and provincial initiatives to launch programing for two weeks for specific subjects and grades —for example, Punjab started programing for grades one through eight only. Both initiatives then released more content in subsequent two-week phases, and gradually expanded to more grades and subjects. The federal and provincial governments plan to develop blended approaches to expand education to remote areas using TV, radio, and online programing, as well as to translate national and international educational resources to increase the availability of content in local languages.

Replicating and scaling up Pakistan’s model

Leveraging stakeholders and resources to ensure a swift remote learning response led Taleem Ghar and TeleSchool to have minimal needs for additional financial resources in the short term. This model is relatively easily scalable and replicable by other education ministries, especially in countries where household TV reach is significantly greater than access to connectivity and other devices or is used to supplement online learning (for example, China).

TV lessons are being used across developing countries to support an inadequate supply of qualified secondary school teachers in rural/marginalized areas as well as in areas with teacher absenteeism (for example, Mexico). “There were teachers who downloaded the Taleem Ghar YouTube channel, and made it more engaging on their own! They recorded their lessons, complimenting the lessons of Taleem Ghar. I would say this is very positive feedback because it shows innovation. It shows buy-in from locals,” stated Abdal Mufti, Head of Research and Policy Wing of the School Education Department of the Government of Punjab, who led Taleem Ghar.

This feature story was produced by the World Bank’s EdTech team for the global program for Continuous and Accelerated Learning in response to COVID-19, being executed by the World Bank in coordination with UNESCO and UNICEF, and supported with funding by the GPE. The World Bank has provided financial support for the following projects in Pakistan with education TV components: ‘Pandemic Response Effectiveness in Pakistan’ (PREP project) which provides funding for TeleSchool, ‘Actions to Strengthen Performance for Inclusive and Responsive Education Program’ (ASPIRE project), and the ‘Third Punjab Education Sector Project’ (PESP III project) which provides funding for Taleem Ghar.