Imagine if one of the keys to improved health, economic productivity, personal dignity and environmental well-being was quite literally right outside your home. Imagine this simple tool with so many benefits being so close. Now imagine not being able to unlock those benefits because of a lack of money, a dearth of information or concern about social norms.

For all too many people across the world, such a vision is sadly a daily reality. This is because, despite the great progress made in providing sewerage infrastructure in urban areas, a huge amount of people – including 28 percent of urban residents in Latin America and the Caribbean – are still not connected to the sewer lines that run in front of their houses. That is to say, despite the immediate proximity to this vital infrastructure, too many households have not connected to the system and therefore are more likely to suffer from illnesses such as diarrhea, lose days to work because of those illnesses and live without the comfort and privacy that comes with not having access to safely managed sanitation. And wider societal public health and environmental benefits will not be realized if all households are not connected to the sewers running down their streets.

A World Bank and Global Water Security & Sanitation Partnership (GWSP) report ‘Connecting the Unconnected’ , launched today, looks at the reasons why so many households still get left behind and remain unconnected to existing or new sewer networks. Based on analysis of good practices from around the world, the report outlines the considerations that should be made in developing a successful sewerage connection program. The report also provides an overview and lessons from global experiences in order to identify the elements that can help maximize connections to sewers, including for low-income households, while drawing on the principles of the Citywide Inclusive Sanitation approach.

It is released under the auspices of Citywide Inclusive Sanitation (CWIS) initiative, which aims to shift the urban sanitation paradigm to focus on the whole sanitation service chain and access for all, especially the poor, and promotes a range of solutions – both onsite and sewered, centralized or decentralized—tailored to the realities of the world’s burgeoning cities. CWIS focuses on service provision and its enabling environment rather than on just building infrastructure. Where sewers are indeed used as part of a city’s response to urban sanitation, a reoccurring challenge is commonly found: despite their proximity to trunk sewerage infrastructure, too many households choose not to connect to the sewers for various social, economic or other related reasons. 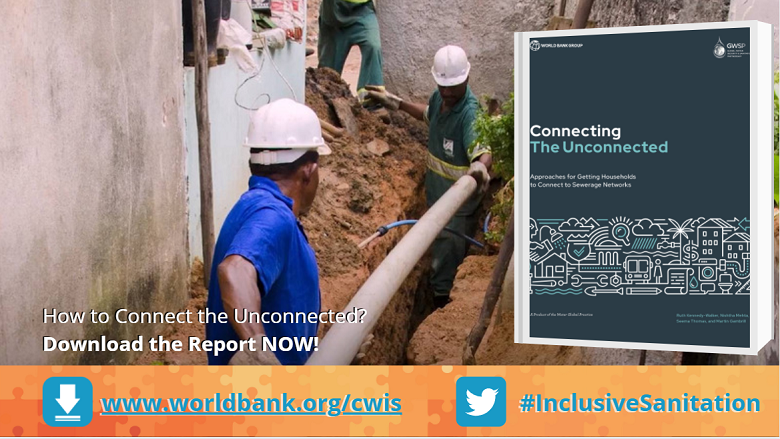 The report reveals that there are a number of reasons why households may not connect to sewerage systems.

Firstly, many households suffer from a lack of money to pay the sewer connection fees, to install the necessary complementary plumbing within the house, or to pay the subsequent monthly bills related to the sewer service once connected. Most unconnected households are poor: for example, in Argentina, El Salvador, Guatemala, Honduras, Mexico, Nicaragua and Uruguay, access rates across the region are more than 40% lower for the poorest fifth of the population than for the richest fifth.

Secondly, there is often a lack of information or a surplus of bureaucracy. Some utilities offer little orientation about how households can go about connecting to the sewer network, or they provide guidance that is unclear or unhelpful – other service providers simply leave it to the households to connect themselves. The processes of some utilities are overly complicated with too much paperwork required by too many authorities. Meanwhile, less than a third of the global population have legally registered rights to their land and homes, which creates further barriers.

Finally, social norms, or a lack of incentives, may discourage households from connecting. If community leaders and other influential figures in the community do not connect to the sewer, others might feel that they also need not connect. Households will often have their own sanitation system in place, and are likely unaware of the negative impacts it could be having on the health of their family and their community as well as on the wider environment. Having an ad hoc sanitation system in place, while not understanding its drawbacks, can lead to residents feeling risk-averse about change.

But not only is safe removal of wastewater from all parts of a city critical to the physical and economic wellbeing of the residents, it is also important to the city as a whole. If residents are too sick to work, cities will have lower economic productivity. If public health is poor, there will be greater demand for essential medical services. If cities are unsanitary, there will be lost opportunities for recreation and tourism. And if households don’t connect to sewer networks, the wastewater treatment plants which the sewers feed, will be underloaded and will not function properly, negatively impacting their operational efficiency.

Furthermore, if households are not connected and therefore not paying sewer tariffs, the utility which manages the sewer networks and treatment plants receives less revenue which can lead to inadequate operation and deferred maintenance of the sewerage and the treatment plant infrastructure, and its eventual deterioration, such that a community’s environmental pollution and associated public health further suffer .

So, connecting unconnected households to existing and new sewerage networks can provide society with numerous and varied benefits. And the report systematically outlines approaches to making this a reality by drawing on good global experiences.

Firstly, focus on the customer. Investment projects frequently focus too much on the pipes and not enough on the people. Households should be engaged early in the process of designing a new sewerage project or developing a sewer connection program – and such engagement should be undertaken by those with credibility and social capital in the community. As a result of such outreach, households should be made fully aware of all of the opportunities and the implications of having a sewerage connection, and should be given the space to outline their specific needs and preferences. The lessons gleaned from such outreach should shape the solutions employed in the sewerage program. Start conversations before starting the design, and certainly before starting to dig.

Secondly, shift the mindset from ‘the last mile’ to ‘the last meters’. It is necessary, but not sufficient, to provide the public sewerage infrastructure to communities – the connections from the sewers to the households themselves are just as important. Going the last meters means understanding why so many connections are inactive, are blocked or do not exist in the first place, and eliminating the bottlenecks causing these situations. It also means proactively assessing situations where household connections are feasible but are absent, and developing an approach to understand and rectify this. And it means being innovative and adaptable – by looking at non-conventional options for getting households connected and by working with the full range of stakeholders to help identify and deliver flexible solutions that will allow all households to connect. Adopting such approaches will help ensure that every household which has the potential to be connected to the sewer system ends up actually being connected.

Finally, the identification of champions at different levels can greatly help move a sewerage connection program forward. High-profile and influential decision-makers can play an important role in shaping the thinking of cities and utilities when it comes to rolling out sewerage connections. When individuals across the ranks of the implementing organizations understand and embrace these ideas, they advocate for their importance, which creates a virtuous cycle and leads to more efficient program design and implementation. Similarly, leaders at the local level can help contribute to a program’s success but mobilizing the community and leading by example. And when households see and appreciate the benefits of having a sewer connection – having been fully engaged and consulted in the design and implementation process – they can vouch for its positive impacts to their neighbors.

Such results at scale are achievable, and their benefits can be life-changing. When it comes to connecting households to sewer lines, those final few meters can make a whole world of difference.