As the world is entering the third year of the global COVID-19 pandemic, it is increasingly

important to understand why many people are still hesitant to get the COVID-19 vaccine even when it is available . However, little is known about vaccine hesitancy in developing countries, as most studies have focused on high-income countries and the few that have analyzed developing countries were either not comparable across countries or not nationally representative.

How prevalent is vaccine hesitancy in developing countries?

In a recent working paper, a collaboration between experts from the Poverty and Equity and Health, Nutrition and Population teams, we estimate levels of vaccine hesitancy in 53 developing countries – accounting for more than half of the population of low- and middle-income countries excluding India and China, between October 2020 and August 2021. The estimates are based on data from the World Bank’s COVID-19 high-frequency phone surveys, which either resampled respondents from a previous nationally representative survey or used random digit dialing in countries where mobile phone ownership is high.

On average, across the 53 countries, one in five adults were hesitant about getting a COVID-19 vaccine (Figure 1). The highest levels were observed in Eastern European and Central Asian countries, and the lowest in Latin American and Caribbean  countries. In most countries, we were able to assess the “strength of sentiment” by comparing the share of respondents who said “no” vs those that answered, “not sure.” This is important because people who are “not sure” about getting vaccinated are likely to be more easily persuaded than those who answer that they would not get vaccinated. We found that in 15 countries over 10 percent of respondents reported being “not sure,” suggesting that more opportunities to increase vaccine uptake exist in these countries  (Figure 2). Female respondents, younger adults, and those with less formal education reported higher levels of hesitancy.

Why are people hesitant to take the shot?

The main self-reported reason for being hesitant was concern over safety, especially worries about side effects. The second most-common concern was about the efficacy of the vaccine, followed by a dislike of vaccines in general  and a preference for natural immunity (which includes perceiving oneself as having a low risk for contracting COVID or already having had COVID-19). Interestingly, supply-side concerns were not a commonly cited reason (6% on average across surveys with the single answer option). However, there was a set of small countries in Latin America where over 10% of respondents cited supply constraints as their primary concern, specifically “health center too far or hard to reach” or “I don’t have time to go to get vaccinated.” However, the low incidence of supply-side reasons may be influenced by the framing of the question, as respondents may have interpreted the question of whether they would get vaccinated “when the vaccine becomes available,” as indicating a time when current access constraints get resolved. In Eastern Europe and Central Asia (ECA), counter-indication – believing one should not be vaccinated due to pre-existing health conditions – has been identified as a significant barrier to vaccination (World Bank, UNICEF and JICA, 2021). The only ECA country with information on vaccine hesitancy reasons in our sample is Georgia, where the most common reason for not getting vaccinated was not being eligible, which is consistent with the earlier counter-indications findings.

Are people more hesitant about the COVID-19 vaccine than other vaccines?

The estimates of COVID-19 vaccine hesitancy are higher than hesitancy reported towards other vaccines. Possible reasons include the fact that it is very new and uses an innovative technology (mRNA) , also that it was rapidly developed with a streamlined approval process, and may have unknown long-term effects. This is consistent with the reasons given by respondents, which are primarily around safety, and to a lesser extent efficacy. However, the higher levels of hesitancy towards the COVID-19 vaccine suggest the challenges in scaling up COVID-19 vaccination campaigns may be even greater than for other diseases.

This study provides valuable data that can aid policy makers in designing vaccination campaigns in developing countries . Knowing that hesitancy is less prevalent than previous estimates may bolster the case for expanding vaccination interventions. Specifically, knowing that people over the age of 65 are the least likely to be hesitant provides an important rationale for scaling up vaccine rollout in this population group, which is at the highest risk of severe disease and mortality from COVID-19. In many countries, a sizeable share of the hesitant individuals reported being “not sure” about getting vaccinated (rather than definitely not being willing), a sentiment that offers an opportunity to influence vaccination decisions.

In addition, the findings point to the fact that it will be important to design vaccination campaigns that address concerns about safety, especially the side-effects, and that target the more hesitant groups , including women, younger adults, and less educated adults. Given the heterogeneity in information sources across population groups, multi-pronged strategies may be needed.

Figure 1: Share of households that were hesitant to be vaccinated against COVID-19 in 53 countries 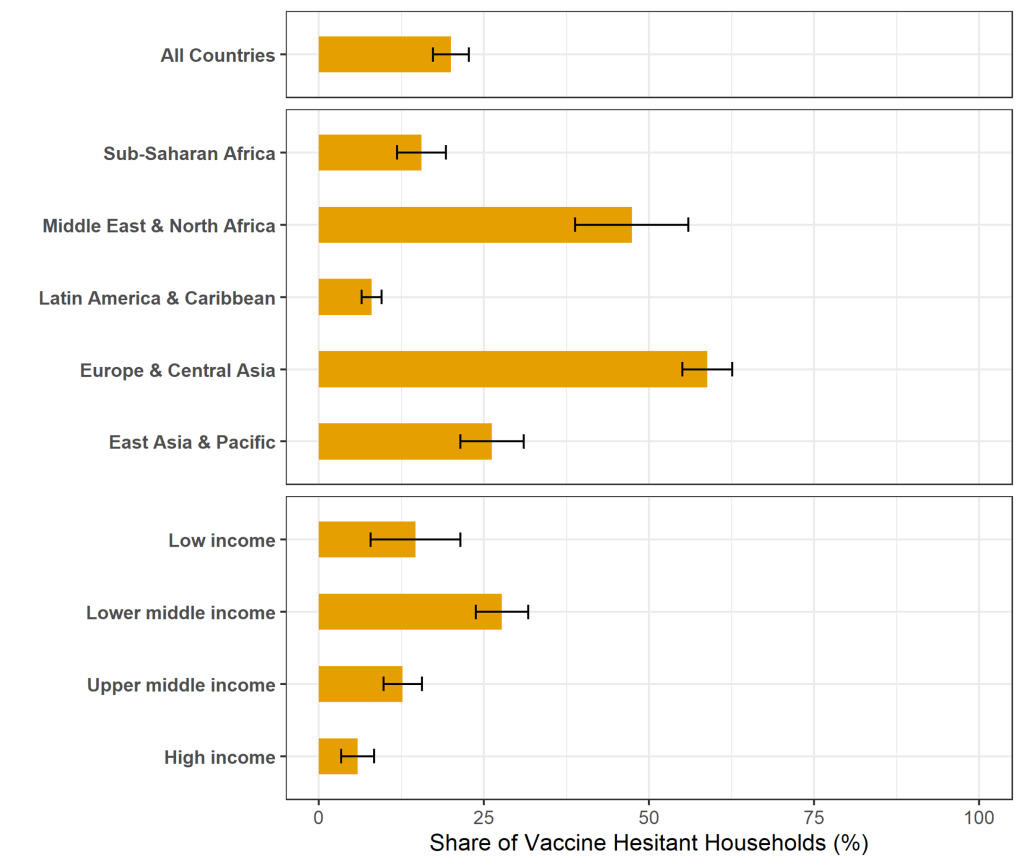 Note: Weighted estimates, with weights scaled such that countries are given equal weights.

Figure 2: Strength of sentiment: share of households in 46 countries reporting being “not sure” if they will take the COVID-19 vaccination when available 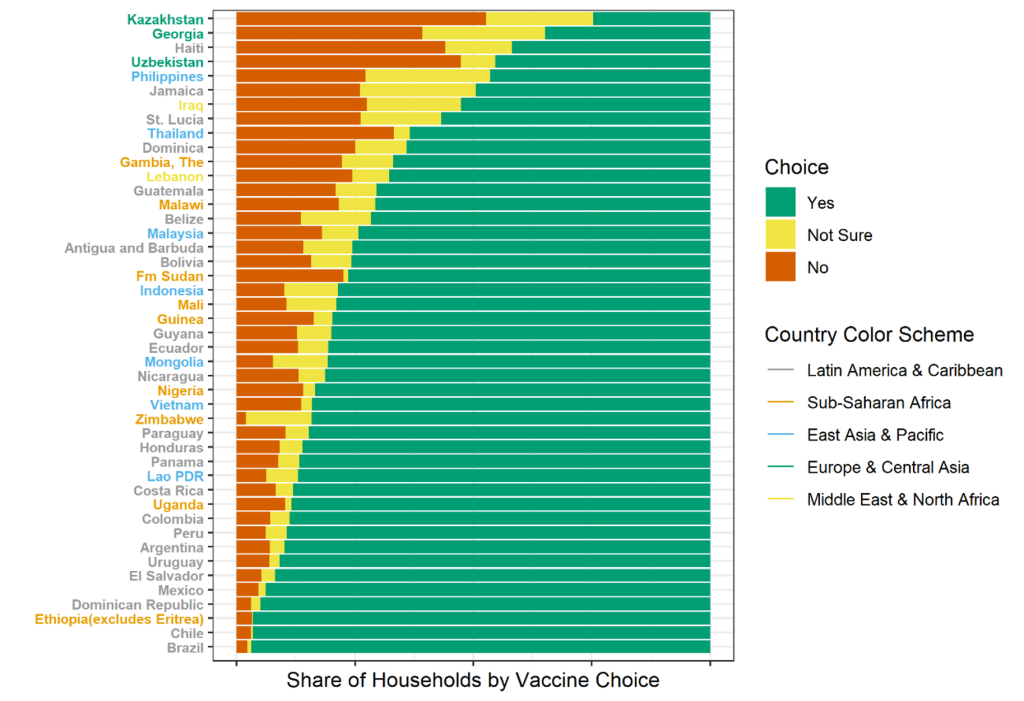 Note: Figure only includes the 46 countries with three response options (yes, not sure, no).

Low- and middle-income countries can transition to low-carbon, resilient growth pathways if key conditions are met with international support

WASHINGTON, Nov. 3, 2022—Investing an average of 1.4% of GDP annually could reduce emissions in developing countries by as much as 70% by 2050 and boost resilience, according to a new report from the World Bank Group.

The analysis, Climate and Development: An Agenda for Action, compiles and harmonizes results from the Bank Group’s Country Climate and Development Reports, covering over 20 countries that account for 34% of the world’s greenhouse gas (GHG) emissions. It shows that investment needs are markedly higher in lower-income countries which are more vulnerable to climate risk, often exceeding 5% of GDP. These countries will need increased amounts of concessional finance and grants to manage climate change impacts and develop along a low-carbon path.

The report draws from the richness of the individual country reports and highlights lessons for countries on integrating climate and development objectives. It finds that this approach to climate action can help them manage the negative impacts of climate change, while generating positive impacts on GDP and economic growth, and delivering critical development outcomes such as reducing poverty. The key conditions for success include impactful reforms, improved allocation of public resources, higher mobilization of private capital, and significant financial support from the international community.

The report also notes that while all countries have to increase their climate action, high income countries with their greater responsibility for emissions need to lead the way with deeper and more rapid decarbonization, as well as increased financial support to lower income countries. Major current and future emitters in the developing world also have a key role to play for the world to achieve the goals of the Paris Agreement. The report also examines the technologies and innovations needed for lower carbon intensity production of electricity, steel, cement, and manufacturing, and how the world will build green and efficient supply chains for a sustainable future.

Country Climate and Development Reports combine the best available data, models, and tools and aim to provide policymakers with immediate and actionable recommendations to guide climate and development decisions today. They are a core element of the World Bank Group’s Climate Change Action Plan, which outlines how the WBG will support climate action in developing countries.

Countries need to prioritize and sequence key investments and policy reforms, according to the report. These will deliver multiple benefits. And emission reductions can deliver immediate development outcomes such as reduced vulnerability to fossil fuel price volatility, improved trade balances and enhanced energy security, and better air quality and related positive health impacts. Early action can also avoid locking countries into high emitting infrastructure and systems, which will be costly or even impossible to transform in the future.