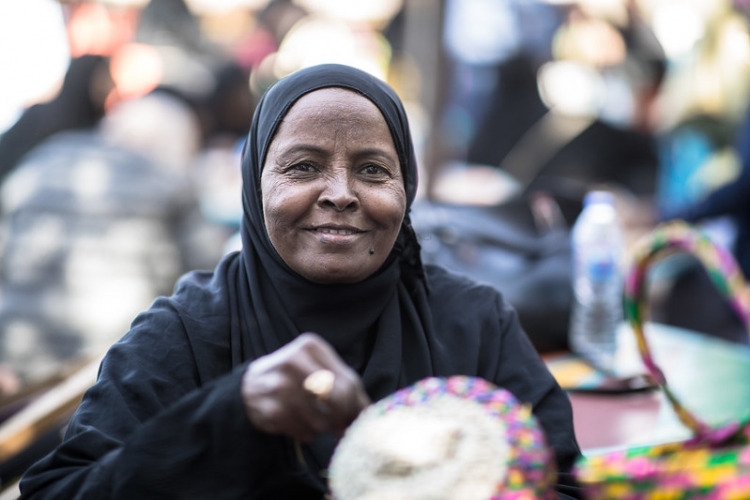 The impact of economic inclusion programs

The synthesis in the SEI report 2021 reviews 43 government-led and 37 non-government-led economic inclusion programs (figure 1). The evidence is representative of the distribution of programs across regions, with the majority in Sub-Saharan Africa (38%) followed by South Asia (20%). 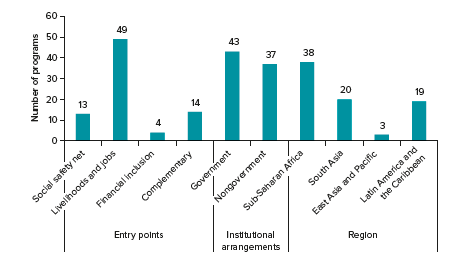 In the short-term, economic inclusion programs have helped participants invest in productive assets as well as save, earn, and consume more than they could have without these programs (figure 2). Most programs increase household incomes and resilience to shocks by diversifying livelihoods and sources of income, facilitating savings and access to affordable credit, and building assets and social networks.

By enhancing economic opportunities, asset ownership, and social networks, several programs have also empowered women.  The limited evidence on outcomes for children reveals largely positive impacts, suggesting that the income generation activities promoted by these programs do not crowd out investments in human capital. 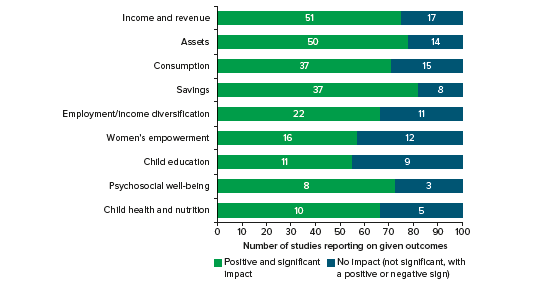 Source: SEI Report 2021. Note: The figure shows, within each broad outcome category, the number of evaluations that reported at least one indicator with a positive impact significant at the 10 percent level or higher or with no impact.

Inevitably, however, several debates remain ongoing. Three are discussed here: the sustainability of impacts, the bundling of interventions (a key feature of economic inclusion programs), and the impact at scale.

Debate 1: Are these impacts sustained over time?

The impacts of economic inclusion programs are often sustained, at least in the medium term, although typically they are smaller in size.  In most cases, the impacts are evident three to four years after enrollment in a program (for one-off or time-bound programs, the impacts last typically a year or two after beneficiaries exit the program).

However, much less is known about the longer-term impacts. The limited evidence suggests that long-term impact sustain up to seven years, but the effects dissipate after nine to ten years. The evidence base on the long-term sustainability of impacts needs to be broadened beyond the current small set of programs, especially for government-led programs.

This is demonstrated by several non-government led programs, but more work is needed to identify (1) the marginal contributions of constituent interventions to overall impacts; (2) the role of timing, sequencing, and coordination in maximizing the impact of a bundled set of interventions; and (3) the corresponding implications for cost-effectiveness, especially for government-led programs.

The government-led programs also demonstrated sustaining impacts, even as programs expanded their functional scope and coverage (for example, Bihar, India’s JEEVika program and Peru’s Haku Wiñay program) and in shock-prone areas (for example, the Social Safety Net-Plus programs in the Sahel). 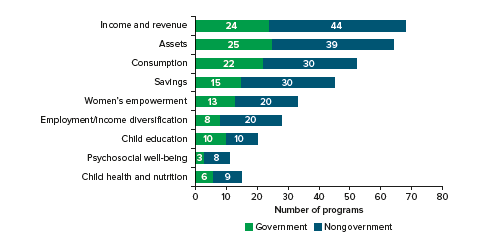 The evidence on economic inclusion programming is set to grow significantly in coming years.

The next wave of evidence will emerge for government-led programs—a quarter of programs studied in the Partnership for Economic Inclusion (PEI) Landscape Survey 2020 will be evaluating impact at scale. A deeper understanding of operational issues such as bundling and coordinating interventions and the underlying market failures is also expected (see figure 4 and related research programs at the Innovations for Policy Action (IPA), BRAC, and the World Bank’s Sahel program).

Supporting this move towards evidence-based programming, PEI is intensifying its innovation and learning activities to support the creation, curation, and application of evidence about economic inclusion programs. This will help governments, World Bank country teams, and the broader community of practice to operationalize economic inclusion programs at scale for the benefits of the world’s poorest populations.