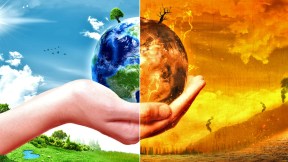 Humanity has always been on the move.

People move for many reasons – economic, social, and political. Now, climate change has emerged as a major driver of migration, propelling increasing numbers of people to move from vulnerable to more viable areas of their countries to build new lives.

The newly released World Bank report, Groundswell: Preparing for Internal Climate Migration, analyzes this recent phenomenon and projects forward to 2050. Focusing on three regions — Sub-Saharan Africa, South Asia, and Latin America – the report warns that unless urgent climate and development action is taken, these three regions could be dealing with a combined total of over 140 million internal climate migrants by 2050.These people will be pushed out by droughts, failing crops, rising sea levels, and storm surges.

But there is still a way out: with concerted action – including global efforts to cut greenhouse gas emissions, combined with robust development planning at the country level –the number of people forced to move due to climate change could be reduced by as much as 80 percent – or 100 million people.

“We have a small window now, before the effects of climate change deepen, to prepare the ground for this new reality. Steps cities take to cope with the upward trend of arrivals from rural areas and to improve opportunities for education, training and jobs will pay long-term dividends. It’s also important to help people make good decisions about whether to stay where they are or move to new locations where they are less vulnerable.”

It is worth taking a moment to remember that behind all trends there are real people with dreams, hopes, and aspirations. We met three people whose lives have been transformed in different ways as they have dealt with the impacts of climate change.

Monoara Khatun is a 23-year-old seamstress from Kurigram, Bangladesh. Her village has been flooded many times and this has led to increasing unemployment and food scarcity.“Floods come every year, but this year the situation is worse,” says Monoara. “Because of the flooding, there are not a lot of opportunities for work, especially for women in our village. My house is badly affected by this year’s flood, and many rice paddies got washed away.” Monoara moved to the capital city, Dhaka where she was connected to the NARI project, a World Bank initiative designed to provide training, transitional housing, counseling and job placement services for poor and vulnerable women. Since then, she has been able to support her family back in Kurigram and has gained financial independence. Monoara’s story highlights the importance of good development planning through programs like NARI, helping countries be better prepared for increased migration.

According to the report’s “pessimistic” scenario, South Asia is projected to have 40 million internal climate migrants by 2050, with Bangladesh contributing a third of that number. Right now, close to half of Bangladesh’s population depends on agriculture, so changes in water availability and crop productivity could drive major shifts in population. Bangladesh has already undertaken initiatives in the water, health, forestry, agriculture, and infrastructure sectors to mainstream climate adaptation into its national development plans. Several adaptation programs are underway, including a program to enhance food security in the northwest of the country and another to encourage labor migration from the northwest during the dry season.

Wolde Danse, a 28-year-old from Ethiopia, is also turning adversity into a chance to change the course of his life. The eighth of 16 children, he left his father’s small farm in a drought-stricken part of his country and moved to the city of Hawassa in search of new opportunities: “In the planting season, it wouldn’t rain, but when we didn’t want it, it would rain. This created drought, and because of this, I didn’t want to suffer anymore.” After some initial struggles, Wolde enrolled in Ethiopia’s extensive urban safety net program, and now he receives a small salary for supervising street cleaners. As part of the program, Wolde can attend Hawassa’s university without paying tuition, and he’s planning to finish his studies to benefit his country and his family.

Without concrete climate and development action, Sub-Saharan Africa could have 86 million internal climate migrants by 2050, with Ethiopia one of the most vulnerable countries to climate change in Africa, due to its reliance on rain-fed agriculture. Ethiopia’s population is likely to grow by 60-85 percent by 2050, placing additional pressure on the country’s natural resources and institutions. Ethiopia is taking steps to diversify its economy and prepare for increased internal migration.

Sometimes, however, migration is not the answer

Some communities are finding ways to deal with climate change that don’t require migration. Javier Martinez, 26, and his brother have chosen to stay in their community in Oaxaca, Mexico and expand their carpentry business. They have been able to do so thanks to a sustainable forestry program that has helped to attract investors and enabled the community to adapt to a changing climate while building economic opportunities. Javier explains: “At the forest level there is employment, in businesses there is employment, so there is not a strong need to go away, because in the community there is a wide range of opportunities.” Efforts like these around the world to build more sustainable forestry programs are paying climate dividends globally and supporting economies like Javier’s locally.

According to the report’s worst-case scenario, Latin America is projected to have 17 million internal climate migrants by 2050. Mexico is a large and diverse country in terms of physical geography, climate, biodiversity, demographic and social composition, economic development, and culture. Rain-fed cropland areas are likely to experience the greatest “out-migration”, mainly as a result of declining crop productivity. There will also be increases in average and extreme temperatures, especially in low-lying (and therefore hotter) regions, such as coastal Mexico and especially the Yucatan. However, as an upper-middle-income country with a diversified and expanding economy, a predominantly urban population, and a large youth population entering the labor force, Mexico has the potential to adapt to climate change. Still, pockets of poverty will persist, given that climate-sensitive smallholders, self-employed farmers and independent farmers tend to have higher than average poverty rates.

Monoara, Wolde and Javier’s stories tell us that, while internal climate migration is a growing reality in many countries, it doesn’t have to be a crisis. With improved policies, countries have the chance to reduce the number of people forced to move due to climate change by as much as 80 percent by 2050.

The report finds that countries can take action in three main areas:

Strong global climate action is needed to meet the Paris Agreement’s goal of limiting future temperature increase to less than 2°C by the end of this century. However, even at this level of warming, countries will be locked into a certain level of internal climate migration. Still higher levels of greenhouse gas emissions could lead to the severe disruption of livelihoods and ecosystems, further exacerbating the conditions for increased climate migration.

There is an urgent need for countries to integrate climate migration into national development plans. Most regions have laws, policies, and strategies that are poorly equipped to deal with people moving from areas of increasing climate risk into areas that may already be heavily populated. To secure resilience and development prospects for everyone affected, action is needed at every phase of migration (before, during and after moving).

3. Invest now to improve data on the scale and scope of local climate migration:

More investment is needed to better understand and contextualize the scale, nature, and magnitude of climate change-induced migration. Evidence-based research, complemented by country-level modeling, is vital. In support of this, new data sources, including from satellite imagery and mobile phones, combined with advances in climate information, can help countries improve the quality of information about likely internal migration.