Precious metal prices trended higher during the second quarter of 2021 but retraced markedly in mid-June following the US Federal Reserve’s stance toward a faster tightening of monetary policy. More broadly, strengthening demand and ongoing inflation concerns boosted gold prices while silver and platinum prices were further supported by the ongoing recovery in industrial activity and some supply disruptions. Precious metal prices are anticipated to stay high in 2021 before retreating in 2022. 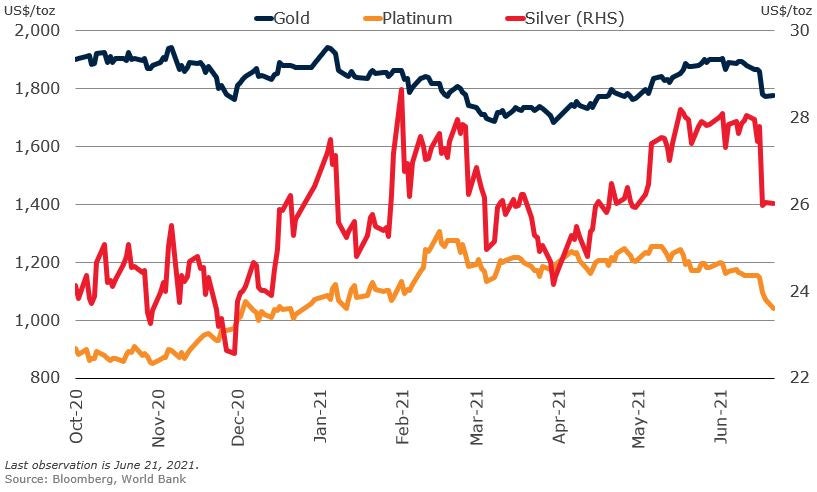 Gold prices surpassed US$1,900 per ounce in early June—the highest since January 2021—driven by jewelry demand in China, investment inflows, and lower real interest rates.  Chinese holiday- and wedding-related jewelry purchases provided support for gold prices, but this was offset by muted Indian demand due to surging COVID-19 infections. Gold-backed exchange-traded funds (ETFs) registered inflows in May, after three consecutive months of outflows. U.S. real interest rates also fell in May as monetary policy remained accommodative and inflation expectations increased. Accommodative monetary policy keeps the opportunity cost of holding gold low, while high inflation expectations increase the appeal of gold as an inflation hedge. Gold price weakened in mid-June, after the US Federal Reserve signaled that it would raise interest rates and end its bond purchases sooner than expected. 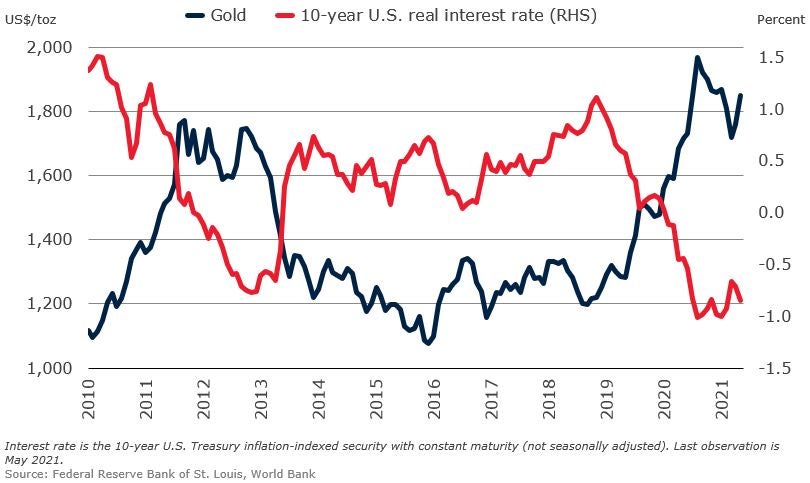 Silver prices, which averaged US$27.50 per ounce in May and early June, have continued to outperform gold. The gold-to-silver price ratio has fallen to 67 from its all-time high of 112 in April 2020.  Silver prices have been largely supported by robust industrial demand. More than half of silver’s demand comes from industrial applications, such as electrical, electronics, autos, and solar power (compared to less than 10 percent for gold). However, prices dropped sharply in mid-June following an unanticipated shift in the US Federal Reserve monetary policy stance. 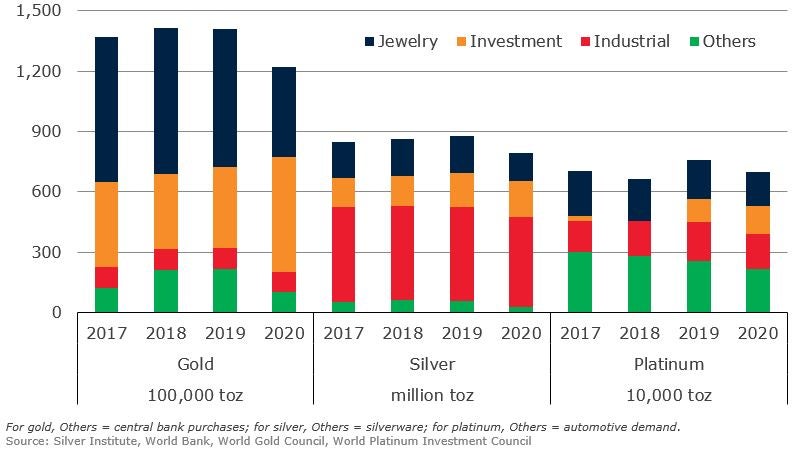 Platinum prices have been buoyed by a recovery in jewelry and industrial demand, tighter vehicle emission standards, and supply disruptions.  Platinum demand in industrial applications and jewelry demand has strengthened amid the recovery in global economic activity. Automotive demand has increased as tighter vehicle emission standards in China and Europe require higher platinum use in autocatalytic converters, while supply disruptions due to flooding at two mines in Russia also supported prices. The global shortage in semiconductor chips is a key variable for platinum demand, as auto manufacturers may be forced to drop certain chip-intensive features from some models or temporarily shut down some factories. In the longer term, battery-driven electric vehicles present a threat to auto catalyst demand in internal combustion engine vehicles. However, quicker adoption of green hydrogen technologies could boost platinum’s demand (platinum is used in fuel cells and in the electrolysis of water to produce green hydrogen).