The Fragility Forum was held in Washington D.C. from March 5 to 7. More than 1,000 people from over 90 different countries attended. At one of the events, ‘Real Governance in FCV settings: Engaging State and Non-State Actors in Development’ practitioners and policy-makers discussed which actors to work with in complex FCV situations, and what the choice of actors would mean from a human rights and social accountability perspective. 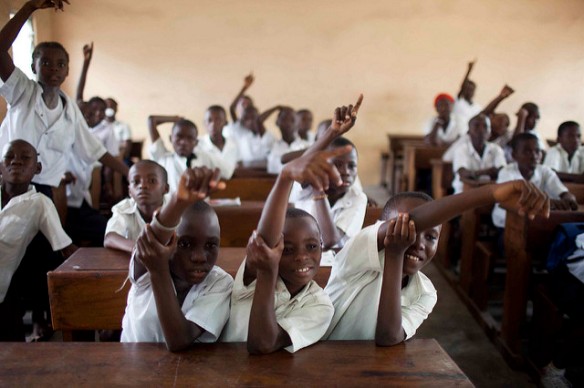 In Fragile, Conflict-affected and Violent States (FCVs), the formal state typically has a low capacity to deliver basic services, to respond to demands and to impose security. It often does not have full or exclusive authority over its territory and is competing with other groups for legitimacy to exercise state powers.

Yet even in states considered fragile, some basic service provisions (health, water, education) continue to take place: this involves local forms of order and authority. Depending on the context, a variety of non-state actors can be involved: tribal leaders, faith-based organisations, local strong men (they are seldom women); insurgent groups; various community groups and local CSOs, etc. This mix of formal state structures and non-state actors forms what researchers call ‘real governance’.

Successful delivery of services often requires negotiations or partnerships with and between these groups. Ahmadou Moustapha, Senior Adviser Governance Global Practice, at the World Bank, and former Country Director in the Democratic Republic of Congo (DRC) offered an illustrative example by describing how education in the DRC is provided by a mix of Faith-Based Organizations and State Actors[1], in close collaboration with each other. This has led to very positive outcomes in terms of student enrolment despite the long-standing fragility of the country.

Engaging or partnering with non-state actors in FCV states is often a necessity for external actors who want to engage – yet it can prove challenging for the donor community, for a variety of reasons:

1. In uncertain and fragile environments, it might be difficult for external actors such as development agencies to identify possible non-state partners and even more challenging to fully understand these actors’ motives, constituencies and modes of operation. It might also be hard to establish what legitimacy they have amongst the local population.

2. Some of these groups can be considered off-limits for political reasons, for instance when they challenge, or are perceived to challenge, the authority of the state.

3. There are also normative considerations to take into account – especially from a human rights perspective. Some of these actors might represent constituencies where for example women’s and children’s rights are not a priority.

4. Working with such groups comes with specific practical challenges, such as when donors require relationships be formalized via written contracts.

Despite these challenges, the panellists strongly agreed that external actors need to and should engage with a variety of actors, including non-traditional development partners. But how to do it, and with whom are trickier issues. An in-depth understanding of the interaction between state and non-state actors was stressed as key to understanding how to engage. But how do we as external actors make sure that we understand what is happening on the ground, and that we get the story right especially in areas where international actors can’t visit due to security constraints?

Some of these groups might commit human rights abuses– is it still possible for the international community to engage with them? The UN’s Office of the High Commissioner for Human Rights (OHCHR) has thought hard about these issues and has recently came up with its own internal guidelines for engagement with de facto authorities and non-state armed groups.

The session concluded that it is essential to continue to discuss how external actors can, and should, engage with the ‘real governance’ on the ground. More critical thinking is also needed to explore the nature of ‘state’ and the nature of ‘government’. Considering the interlinkages between state and non-state actors – do we need to stretch the idea of ‘state’ in our state-building efforts to incorporate more non-institutional models?

[1] For more information on the complex negotiations between faith based organizations and the government in the DRC, see for ex. Kristof Titeca’s and Tom de Herdt’s research on: ‘Real Governance: Beyond the ‘Failed State’: Negotiating Education in the Democratic Republic of Congo’.