Eighty-year-old Bibi Sakina, a resident of Herat City in western Afghanistan, has been severely affected by the COVID-19 pandemic. Her 75-year-old husband, Hassan Haidari, has diabetes. He contracted COVID-19 when the virus peaked and was hospitalized for 18 days. Sakina, who had survived a stroke earlier, could not imagine a worse situation, but soon after her husband left the hospital, they ran out of food.

This is in addition to the widespread seasonal hunger due to conflicts, slow growth, drought, and high unemployment that has disproportionately impacted low-income urban and rural families. According to the United Nations, nearly 12 million Afghan citizens face acute food insecurity and lack access to stable jobs and income

Bakhtiar, 25, a resident of Mandozai village in Mehtarlam, the provincial capital of Laghman, and a daily-wage worker, is among the vulnerable thousands who have been hit hard by COVID-19. “Most people in our village are already poor and they supported their families with daily jobs,” he says. “In my case, our entire family contracted COVID-19, so we couldn’t work and now we face economic difficulties.”

Bakhtiar is thankful to Dastarkhwan-e-Meli, which gave his household a relief package. “It has satisfied our hunger by providing us with some essential food items, such as rice, flour, oil, [and] red beans for some time,” he says.

“It was very hard to afford even a bag of rice and a can of cooking oil. Dastarkhwan-e Meli has met some of our most pressing needs.”
Bibi Sakina,
resident, Herat City, Herat province 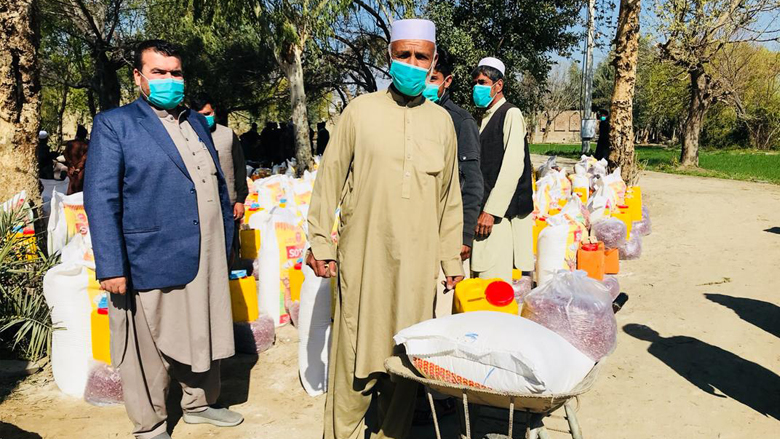 Supported by the World Bank and ARTF the Dasterkhwan-e-Mili program will provide relife packages to five million Afghan householdes who have $2 or less income per day.

The Afghan government rolled out Dastarkhwan-e Meli to alleviate hunger and unemployment among the country’s most vulnerable communities. The program is funded by the COVID-19 Relief Effort for Afghan Communities and Households (REACH) and the Citizens’ Charter Afghanistan Project (CCAP).

The Dastarkhwan-e Meli relief distribution drives have only just begun and will reach more than 5 million households who face food insecurity and hunger due to COVID-19, conflict, and unemployment. By May 2021, nearly 750,000 households had received relief packages under the program.

Program resources are channeled directly through CDCs, which purchase relief packages from local providers to create jobs and stimulate local economies. The relief package provides 2–3 weeks of rations to Afghan families when most needed. Each package, with a value of 4,000 afghanis (about $52),* contains essentials such as cooking oil, rice, beans, flour, peas, and soap.

Abdul Hadi, 28, another resident of Mandozai village and also a daily-wage worker, has eight children and is also responsible for his brother’s widow and her five children. He says that the relief packages helped save their lives at a critical time. “We cannot find any job due to the coronavirus pandemic these days,” he says. “We slept on empty stomachs several nights. Both my and my sister-in-law’s family received relief packages.” 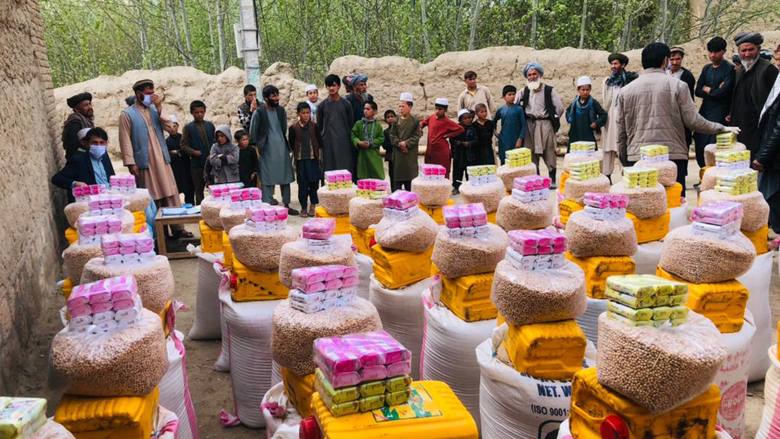 Undertaking such a massive relief effort during a pandemic is complex. CDCs face delays in distributing assistance as social distancing measures make it more challenging to reach people.

Dastarkhwan-e Meli has set up a dedicated grievance redressal mechanism to address people’s complaints and investigate allegations of corruption or abuse related to the project. This work helps ensure the transparent and proper use of resources and the successful delivery of the food and hygiene packages to families in need,

Awareness about this mechanism has been raised among the public through public service announcements on TV, radio, and social media that discourage instances of corruption.

CCAP and REACH are supported by the Afghanistan Reconstruction Trust Fund, a multi-donor trust fund managed by the World Bank on behalf of 34 donors, and the International Development Association, the World Bank Group’s fund for the poorest countries.