Imagine you are in a race, running at a steady pace during the first two-thirds. However, 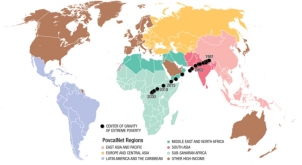 you notice that your pace is slowing, and you realize that unless you make changes you are not only not going to win, but you risk not even completing the race.

I find this analogy to work well while narrating the story about the reduction in global extreme poverty to my family and friends. As we move into 2020, we only have a decade to make extreme poverty history.   Even though this is when we should be ratcheting up the pace, it has been slowing for the last few years, so that the world not only risks missing out on its extreme poverty reduction goals, but in some cases, we are seeing a reversal in the gains achieved.

One could point to the uneven progress across regions as well as in countries. The two regions with the most poor people in 1990 were East Asia and Pacific and South Asia, accounting for 80 percent of the extreme poor.  With China’s rapid reduction of poverty, the concentration of the global poor shifted from East Asia in 1990s to South Asia in 2002, and then to Sub-Saharan Africa in 2010.

If we further explore, half of the world’s poor live in just five countries — India, Nigeria, Democratic Republic of Congo, Ethiopia, and Bangladesh. The top two countries — Nigeria and India — are showing diverging trends. Nigeria may have already overtaken India as the country with the most extreme poor while India has been rapidly reducing extreme poverty and estimates forecast that the country can achieve the extreme poverty goal.

Projections also show us that the last mile to reduce poverty is going to be the toughest because extreme poverty is beginning to be concentrated in Sub-Saharan Africa and in fragile economies, places where poverty has become entrenched.

That’s why in 2020, we will be launching a new Poverty and Shared Prosperity Report that will look at what will it take for countries to expedite poverty reduction, focusing on both policies choices and implementation challenges. The report will also let us know based on the latest data if the world is back on track to ending extreme poverty or if urgent course-correction is required.

While the report will deliberate specific policy choices for pathways out of poverty, we also know from successful country experiences some common building blocks for poverty reduction. Six broad policy actions emerge that have proven to work across countries at various levels of development:

It goes without saying that for countries to adapt these policy interventions requires strong and stable growth. However if the benefits of such growth isn’t shared widely, there is no way a country can sustain its progress.

We now know that nations with a widening gap between those who can and cannot access opportunities in life have difficulty sustaining economic growth and social stability over time. To date, no country has managed to transition beyond middle-income status while maintaining high levels of inequality. That’s why acting on inequality isn’t only beneficial for poverty reduction but also for ensuring social cohesion.

Going back to my race analogy, we are entering the final phase of the race and our collective actions will determine if we can take the checkered flag or not by 2030. Of course, extreme poverty isn’t the only goal on which the world will be judged. 2030 will also mark the culmination point for 16 other Sustainable Development Goals adopted by the United Nations. From tackling inequality to curbing climate change, these goals provide an urgent call for action to ensure that we build a better future for everyone. It is now up to all of us — governments, businesses, civil society, and the general public — to ensure prosperity and peace for the people and the planet.