transport sector.  This is a sector that is often overlooked in the climate equation, but it shouldn’t be. Currently responsible for 20% of global GHG emissions and rapidly increasing, transport is something that impacts everyone, everywhere.

The good news is that the tools needed to curb emissions from transport already exist. Some of them – such as enhanced public transport options, active mobility, zero-emission vehicles, and green fuels – are being implemented in many countries. Global sales of electric cars doubled between 2020 and 2021, reaching 6.6 million vehicles, nearly 9% of the global auto market.

But the bad news is that climate-smart transport options are still too much concentrated in the developed world. The shift is less tangible in developing and emerging countries. Simultaneously, GHG emissions from transport in low- and middle-income countries have more than doubled since 2000 and are likely continuing to rise rapidly as motorization and the demand for increased mobility balloons. If this continues, the world is at risk of explosive growth in transport-related emissions that could be catastrophic for climate action efforts. Without bucking this trend and bringing transport decarbonization strategies to more developing countries, we also run the risk of creating a “green divide”: a two-tier world where high-income countries benefit from the transition to cleaner, greener, more modern fuels and transport options, and low-income countries remain trapped in the past. 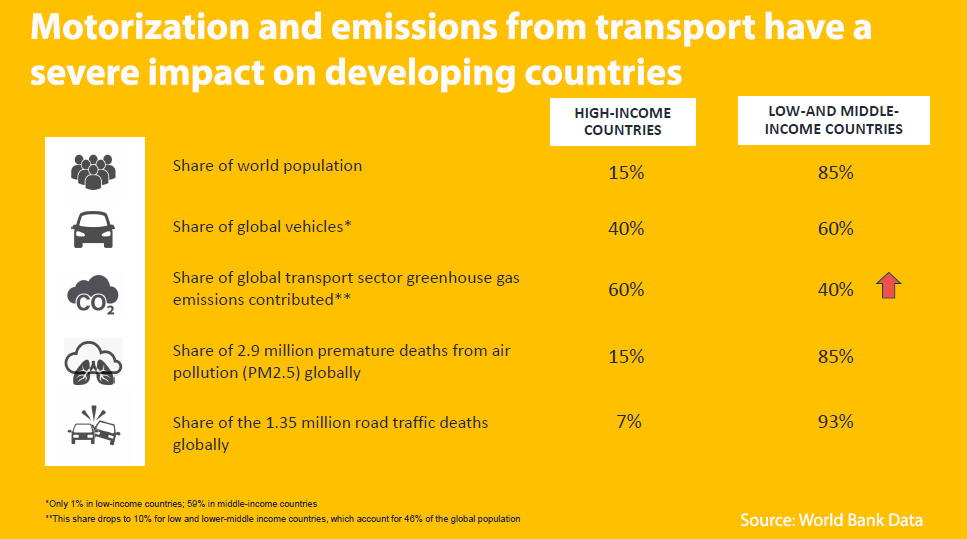 Without serious change, this problem will worsen as low- and middle-income countries expect to double their vehicle fleets – mostly comprised of used, gas-powered cars – in the next 15-20 years.

Another solution is to ensure that cities in developing countries build transport systems that are efficient, safe, and inclusive at the outset, rather than trying to retrofit subpar systems later.

The World Bank is actively working with client countries on both challenges – among others— as part of our ongoing and expanding efforts to decarbonize transport in developing countries.

For instance, in Egypt, we worked with the government to turn in, scrap and recycle 45,000 aging taxis, making travel by taxi safer and reducing emissions by 310,000 tons of CO2 over a 4-year period. Upgrading fleets in this way can bring decades of benefits by averting long-term commitments to systems based on gas-powered vehicles.

And in cities as diverse as Lima, Abidjan, Dakar and Manila, The World Bank is collaborating with local authorities to create bus rapid transit lines. In the right setting, these can be excellent solutions because they replace congestion-causing private vehicles with cleaner public buses. They improve connectivity, reduce commute times, and enable more people to gain access to more jobs and critical services – like schools and hospitals. And they connect with other climate-smart modes of transport that are prevalent in developing countries, such as biking and walking.

We know that projects like this can work, are replicable and help redefine the standard for what’s acceptable in transport. The challenge now is to ensure that there is enough funding to make changes like these universal in developing countries.

For our part, The World Bank has become the largest provider of development financing for transport globally, and across our $31-billion transport portfolio, 75% of projects now include climate co-benefits, which means they directly contribute to reducing countries’ GHG emissions and enhancing climate resilience. We also established the Global Facility to Decarbonize Transport in 2021, which is dedicated to accelerating innovation and investment in climate-smart mobility solutions.

Transport, like climate change, is not going away. These two areas of global concern are inextricably linked. Right now, we need more stakeholders to join us our efforts to promote green transport systems. Our vision is to see more people biking, walking, and using public transport – but not as a last resort or for lack of a private car; but because it is truly the safer, more efficient, and more accessible option.  Join us to make this a reality now.

This is the case for Türkiye, where about 30 cities have been working to improve access to quality, sustainable and resilient public transport, water, energy efficiency, and urban environments. Better planning urban investments helps increase national preparedness and capacity to avoid and adapt to the adverse effects of climate change.

Finally: invest in a ‘people-in-place’ approach to manage the implications of conflict and forced displacement in urban settings: This means accounting for considerations across two dimensions: first, the vulnerabilities of people being displaced, and second, the needs of the place where they are located. As more people access limited services, this places an extra layer of stress on an already fragile system. Interventions, therefore, need to shift from humanitarian assistance to one that integrates displaced people into the urban fabric in a sustainable manner. Our recent experiences supporting a multisectoral approach for comprehensive urban solutions for both the displaced and host communities in Lebanon, for instance, focused on increasing the capacities of local governments and reducing social tensions including by involving communities themselves in the process.

There’s no question the pandemic has left many countries, especially developing ones, with weakened financial capacity; cities too. Therefore, tackling the compounding crises with adequate financing will require governments to play a more active role  and for local levels of government to work closely with them to ensure these finances are directed in transforming cities sustainably taking into account their specific needs and challenges. This requires making informed investments with limited public resources; mobilizing private capital at scale; and making good use of resources from international financial institutions and multilateral development banks, especially to help rebuild the financial capacity of cities which may have reversed during the pandemic.